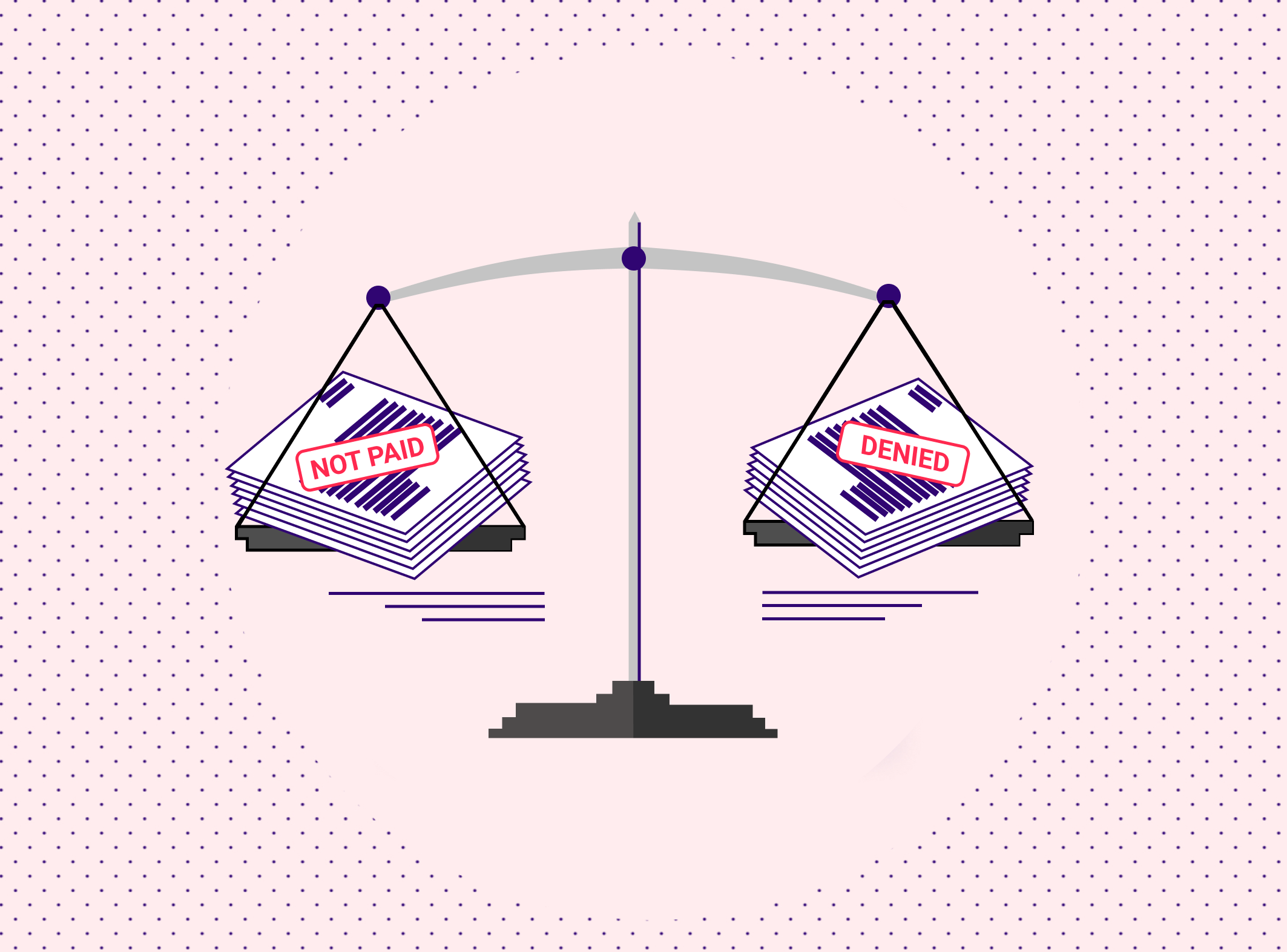 Which is worse: denials or underpayments?

Revenue management has always been the crux of the healthcare industry. You, as the healthcare provider, should receive payment from both payers and patients but you already know you aren’t always getting paid what you deserve. There’s always a level of risk as to whether or not patients will pay their part, but what about insurance companies? They should be a surefire way to get paid what you deserve, right?

Two insurance-based issues plague healthcare: denials and underpayments. In this article you’ll see how these two issues are uniquely and similarly hurting your practice and what you can do to find and prevent both.

What is a denial?

A denial is a medical billing term used for any claim that a payer denies to pay.

Here’s how it works.

A physician practice must submit a claim for a patient service in order for an insurance company to pay the provider. This is simple in theory, but it’s easy to send claims with incorrect or missing information. The insurance claim must include information about the patient, their insurance coverage, the service, their provider and anything else pertinent to the service. If anything is wrong or missing in the claim, the payer may issue a denial to the provider.

Often, providers will have the opportunity to correct whatever was wrong with the initial claim.

These soft denials have the potential to be reversed and eventually paid. However, some denials will never be paid. These hard denials are final. For instance, if a patient isn’t insured by a specific payer, their claim would become a hard denial from the payer.

On the bright side, between 86 and 90% of denials are actually preventable, according to research from the Kaiser Family Foundation.

What is an underpayment?

An underpayment is a medical billing term used to describe an expected value that’s higher than actual payment received for a claim. Typically, your claim did not ask the payer for the full contracted amount, leaving money on the table you could be collecting.

Underpayments are tricky since insurance companies won’t let you know that they aren’t paying you the full contracted amount. Under a lesser-of clause that’s likely in your contract, the insurance company will pay you the billed amount instead of the contracted amount because they can pay the lesser of the two and are not obligated to give you the amount you could’ve received.

With both underpayments and denials, it is your responsibility as the provider to prove to the payer that your claim requires payment, whether more or any payment.

How denials and underpayments can lose you money

With denials, you aren’t getting paid at all—so no payment will always be worse than some payment, even if you could be collecting more. However, underpayments are incredibly difficult to find and analyze. It’s easier to find and reconcile a payment you never received rather than a payment where you could’ve made more money.

How to reconcile denied claims and underpayments

You may not be able to receive additional payment for underpaid claims because insurance may be able to justify that you waived the right to contest the amount if you accepted the original amount or waited too long to act. At any rate, you’ll need to dig into your contract to understand what's happening and exhaust the insurance company's internal administrative appeals process to gather payment.

How to prevent denials and underpayments

Preventing a denial is simple in theory and difficult in practice, but you’ll need to submit a clean claim in order to avoid a denial.

According to the Michigan State Medical Society, clean claims, or claims that are accepted and paid:

*Without any of the items above, a claim can be denied.

Preventing underpayments suggests that you are taking care to flag and analyze past underpayments. This means you’re sifting through your fee schedules and contracts to really understand where problems persist and take actions such as changing charge prices or exhausting an insurance’s appeals process to capture the revenue you’re losing with underpaid claims.

Take care of both underpayments and denials in one product

Rivet is a reimbursement software that gives you the big picture of what’s going on in your practice with payer contracts, fee schedules, denials and underpayments. You can also check eligibility and provide accurate up-front patient cost estimates before services are rendered. The Rivet team will help you aggregate your fee schedules and input your claims data to enable you to increase revenue and decrease A/R days.

For more information about the tools Rivet provides, schedule a Rivet demo.